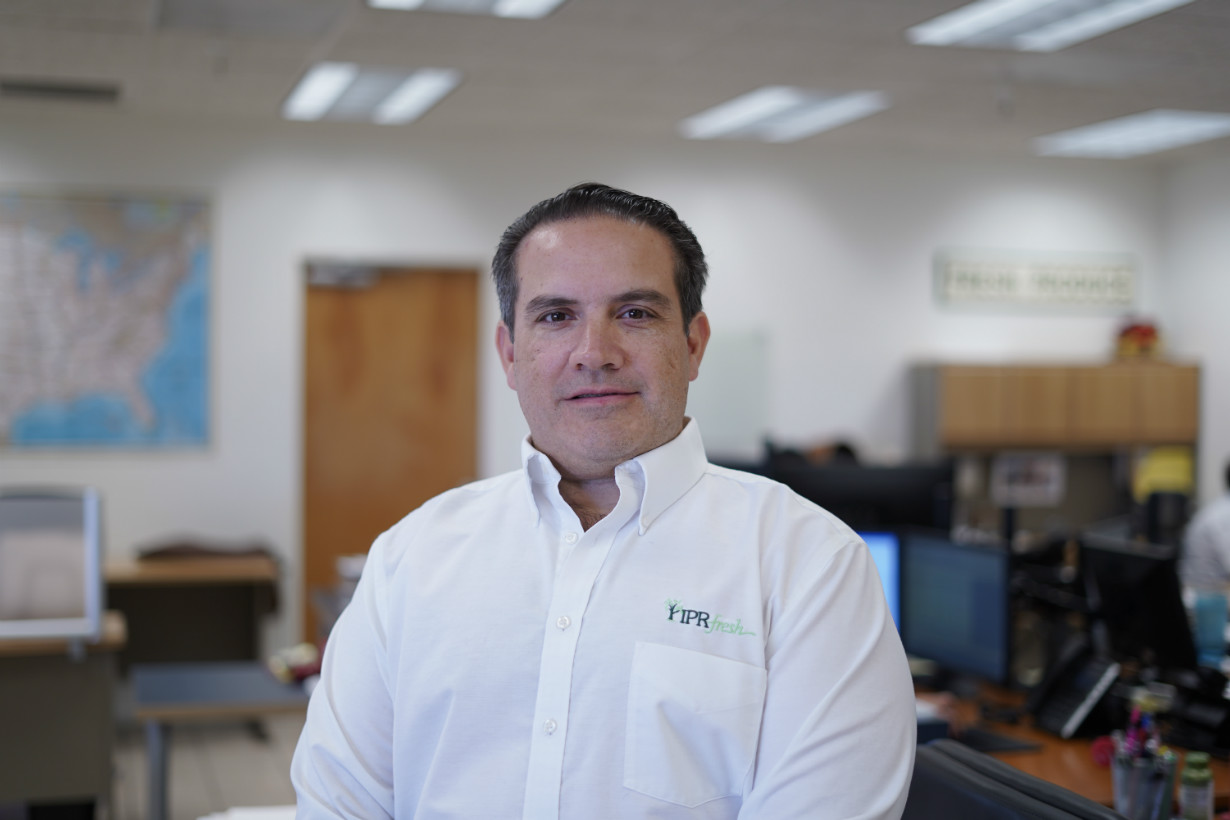 NOGALES, AZ — On Nov. 1 last year, IPR Fresh bought and moved into a modern Nogales warehouse venue to have the space to expand the business.

“We have increased our production this year,” said Jose Luis Obregon, the company president. “Our growth is in a new deal, receiving yellow and Italian squash.”

Jose Luis Obregon stands with the Organic Republic label organic Bell peppers shipped by his firm, IPR Fresh.Obregon said that IPR Fresh is in its second season with a cucumber deal out of nearby Magdalena, Sonora. This fall’s cuke deal runs from September through November and then starts again in May, running into late July. In the summer, these Magdalena cucumbers were shipped through an in-and-out service in San Diego, CA. This was to take advantage of transportation opportunities in San Diego created in large part by volume from Baja. In the summer truck traffic out of Nogales is very slow.

This will be the 16th season for IPR Fresh to be a distributor of Bell peppers. IPR’s conventional and organic Bell season began Aug. 15 and, going forward, will be a year-round program. The organic Bells are shipped under the Organic Republic brand. The conventional Bells are packed in Fresh Republic boxes.

For the fourth year, IPR will be shipping a European cucumber program, running from Nov. 15 until late April or early May.

This fall, IPR Fresh is shipping from Jalisco and Nayarit. “Culiacan will start in the second week of December. Then we’ll be in overdrive from all three areas!” he said.

“We are building a good team, so we can delegate more. We are increasing our customer base. We have traveled to see some current and prospective customers, while doing a grower-outreach in Mexico. We will continue to grow.”

He said the growth comes from new grower relationships. “If we are increasing with Bells, then the customers are asking for more and pushing us, asking for more commodities. That’s why we did squash.”

IPR historically was primarily a consolidator and broker of mixed loads out of Nogales. That continues, but, growing beyond the Bell pepper deal is new to IPR.

“Being a shipper is something we take very seriously. We are positioning ourselves as a quality shipper. People recognize our name.”

Obregon continued, “We’re striving to have the best service possible.”

To expedite its service, on Jan. 1 IPR Fresh hired Gustavo Elias as a compliance manager. “Gustavo has helped with a lot of things,” Obregon said.

Sales coordinator Sergio Valencia is moving more and more into sales, he added.